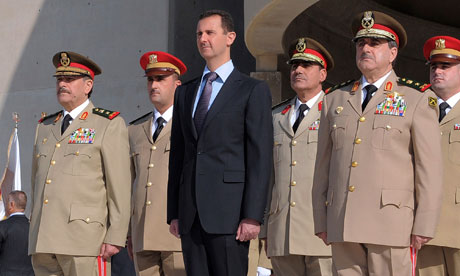 Another fire in the heart of Middle East is burning in the shape of Syrian crisis with multiple serious implications for the country itself, the region as well as the entire Muslim world. Current civil war owes its origin and subsequent aggravation to internal as well as external factors. Single party autocratic rule of Assad family has been in place for last forty-three years, with not an envious record of civil rights and liberties. Wave of “Spring Revolutions” in Arab countries sent its currents to Syria too, where in February 2011 a citizen Hasan Ali Akleh tried to attempt self-immolation against the regime on the pattern of Tunisian Mohamed Bouazizi. Instead of paying heed to the brewing storm, Bashar al Assad claimed that his country was immune from the kind of upheavals in Tunisia and Egypt. Incident of Hasan Ali Akleh triggered small scale protests where police resorted to force against protestors. In the following month, hunger strikes by people imprisoned by the regime on political grounds as well as agitation by general public erupted. Security forces carried out crackdowns and also used force against the protestors. At some places, people also lost lives due to these measures of forces. 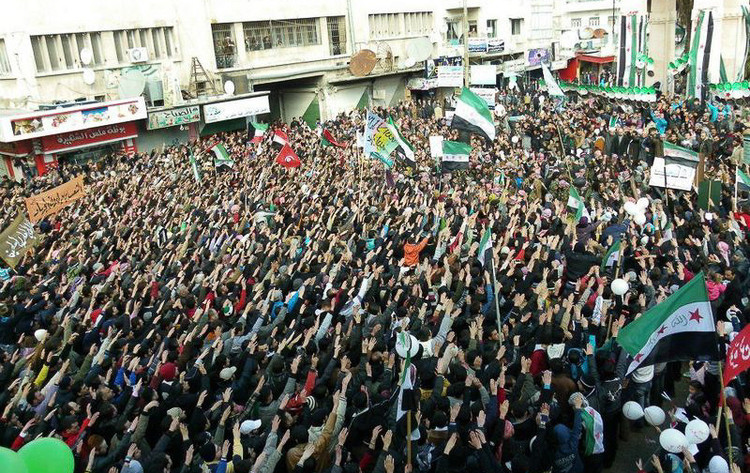 Intensity and scale of protests increased in coming days and so did excesses of state forces. Disturbances provided external elements, having vested stakes and concerns, to jump in the foray, causing escalation of situation that led to civil war, which still continues with no signs of immediate respite. Involvement of external elements provided impetus to anti regime protests. Subsequently, clashes that started in Daraa spread to Jisr al Shughour and then to major cities of Hama, Homs, Aleppo and Damascus. Increased engagement of external powers also effected large scale high profile defections of Bashar loyalists, within army as well as political elite. Besides, efforts were made to strengthen opposition political and armed groups. First all opposition groups were united under Syrian National Council and then under National Coalition for Syrian Revolutionary and Opposition Forces, both based and operating from outside Syria. Similarly, efforts were made to streamline armed resistance from the platform of Free Syrian Army.

The situation has led to severe humanitarian crisis as, according to UNHCR officials, number of registered Syrian refugees in neighboring countries exceeds 1.8 million (0.62 million in Lebanon, 0.5 million in Jordan, 0.41 million in Turkey and 0.1 million in Egypt), while figures in case of internally displaced people (IDPs) touch 3 million. Death toll is also said to have reached almost one hundred thousand with children around ten thousand.

To arrest worsening situation in Syria, Arab League presented a peace plan. The UNO also entrusted Kofi Annan to lead efforts for bringing peace in Syria. Both failed to yield any positive result. Now Lakhdar Brahimi has been appointed UN-Arab League peace envoy for Syria to defuse tension and improve situation. Besides a number of thorny issues particularly future of Assad family and their loyalists in any future settlement, mutual distrust and misgivings are major hurdle to positive outcome of any peace initiative.

Various neighboring, regional countries and international players have their own stakes and interests in stability as well as instability of Syria. The US and its allies in Europe are putting their weight behind the Free Syrian Army rebels with promises to provide logistics and arms to effect fall of Bashar al Assad regime. Syria has been a threat to Israel, both having fought four wars. Unlike Jordan and Egypt (during Hosni Mubarak rule), it did not budge to American pressure on normalization of ties with Israel and continued its defiance and aggressive posture. It also expressed open support to Hezbollah in Lebanon. The US also continues harping on possession of chemical weapons by the Bashar regime, alleging use of the same by Syrian forces against regime opponents. America also propagates that the same may fall in hands of Hezbollah or Al Qaeda affiliated Syrian group Al Nusrah Front, posing serious threat to Israel. Likewise, the regime is also regarded to be a source of strength for Iran. Fall of Bashar regime in Syria is hoped to deprive Tehran of an ally that is considered to have potential to contain Israel. Driven by such vested objectives, the West is out to support and equip those elements that can cause fall of Bashar.

Nonetheless, they are wary of presence of Al Nusra elements and fear any weapons (including those being provided to Free Syrian Army by the West or purported chemical weapons of Syria) may fall in their hands that would have implications of its own sort. The West’s reluctance over provision of anti-aircraft missiles, despite repeated demands by Free Syrian Army commanders, is also to be seen in this backdrop and not based on some any noble intention. Let me here deviate from the main topic for a while to highlight hypocrisy of the western countries. They are openly meddling in internal affairs of Syria and providing logistics as well as arms to Free Syria Army operatives for continuity of bloodshed in the country as it serves their interests. On the other hand, they are totally oblivious to the plight of people of Indian Held Kashmir, who are struggling for their rights that even UNO has guaranteed for them. They strongly resent Pakistan’s, a legitimate party in the dispute, any kind of support for people of Indian Held Kashmir. Such double standards very clearly manifest the west’s attitude towards the Muslim world and should serve as an eye opener for us.

Neighboring and regional countries have their own stakes. Turkey is wary of Syrian Kurds getting enough might to infuse life into Kurdistan movement that has potential to cause disturbances in Turkey. It is to be noted that Syria has 2 million population of Kurds, while among contiguously neighboring countries there are 15 million Kurds in Turkey and 6 million in Iran and Iraq each. Any attempt on Balkanization of Syria would embolden Kurds in surrounding countries, triggering Kurd insurgencies. This would have most serious implications for Turkey where such elements are already active under the banner of Kurdistan Workers Party (PKK).

Iran has its own stakes in continuity of Bashar al Assad’s rule. With Bashar al Assad ruling Syria, it will have a strong ally that is viewed to have potential to contain Israeli threat to Iran and also a source of strength for Shia population in Middle Eastern countries like Lebanon, Iraq, Bahrain, Kuwait etc. It may be added here that Syria is being ruled by Alawite Shia Bashar al Assad, representing 13% Shia population as against 74% Sunni population of the country.

Concerns and conflicting interests of neighboring as well as regional countries and also vested stakes of western countries have led to their overt and covert engagement in Syrian situation. They all are also aware that any miscalculation is fraught with risks. Nonetheless, desperate moves on the part of stakeholders cannot be ruled out. Continuity of civil war would deepen humanitarian crisis and cause insurmountable challenges for anyone sitting at the helm of affairs.

The Muslim countries need to take cognizance of the fact that continuity of civil war is detrimental for the whole Muslim world. Spillover effects of the Syrian crisis for neighboring countries would have adverse bearings for them. Any instability in neighboring countries owing to worsening of Syrian crisis is fraught with risks. Besides, polarization, particularly on sectarian lines, within Muslim world may further increase due to their conflicting and competing interests in Syria. It also exposes adverse repercussions that sectarian division has for the Muslim Ummah and underscores the need to shun the same and forge unity within our ranks. This sectarian divisiveness would serve interests of the western countries and particularly Israel.

The situation also speaks of leadership crisis in Muslim world. There is not a single leader who can play a role in bringing Muslim countries, with competing interests in Syria, to sit together and work for a solution that heralds peace and stability for Syrian people as well as the whole region. People of Syria have every right to live with honor and dignity in their own country. Bashar al Assad also needs to pay heed to aspirations of his own people and bring reforms within system that guarantee prosperity for people and also liberties for them. The Muslim world also needs to wake up as internal problems in countries like Egypt, Syria, Iraq, Somalia and Nigeria etc. would provide opportunities to our opponents to render us helpless and ineffective, driving us to infernos wherein generations to come would keep burning.